You can create 64-bit desktop, web and console apps for Mac, Windows and Linux. In most cases, you'll be able to build a 64-bit version of your existing projects without having to make any changes. As of 2017 Release 3, the Xojo IDE itself is also 64-bit. With 64-bit, your apps gain access to much more memory than before (32-bit apps had a 3-4GB limit) and math-based code can see significant speed increases due to the new optimizing compiler. In addition, 64-bit operating systems can run 64-bit apps more efficiently than 32-bit apps since they do not have to load an extra compatibility layer.

The Inspector for each build target (Windows, macOS and Linux) has a property called Architecture where you can select the type of architecture you want to build. To create a 64-bit app for your existing projects, change the Architecture setting to a 64-bit target and then press the Build button.

Use these two compiler constants to determine the architecture of the app.

In general, you'll want to review any Declares that are used in your project. In particular, if a Declare is using a specific Integer type, such as Int32, it may be possible that the library requires you to use Int64 in a 64-bit app. To simplify this, use the Integer data type which is an alias to Int32 in 32-bit apps and Int64 in 64-bit apps.

The type of app you need to build for your users varies based on the operating systems you need to support.

All versions of macOS supported by Xojo are already 64-bit.

For 64-bit builds, the compiler places some framework DLLs next to the executable and not into the "MyApplication Libs" (or just "Libs") folder like it did for 32-bit builds.

A little history: For 32-bit Windows builds, the compiler doesn't actually spit out a native PE32 file. What it does is writes out a stub executable and then tacks all of the program data onto the end of it. The stub is responsible for loading that data into memory and performing all of the relocations and import binding that the OS loader would normally do. The stub doesn't have to link directly against any of the libraries referenced by the program (including the framework), so Xojo has the freedom to put the DLLs required by the program anywhere. However, this approach occasionally gets apps flagged as malware by antivirus programs and prevents some features Windows users have wanted for ages (like the ability to edit the app manifest).

For 64-bit Windows executables, the compiler is using a native linker to generate actual PE32+ files. These executables link directly against whatever DLLs it needs and are therefore bound to the operating system's search path. In order for the loader to find the DLLs the executable need to launch, they have to be in the same folder as the executable itself. Currently, Visual Studio runtime DLLs appear next to the executable along with the Xojo framework DLL (XojoGUIFramework64.dll). If you use WebKit with HTMLViewer then CEF3 related files and DLLs also appear alongside the executable.

Attempting to the make the Windows build structure look more like macOS bundles is unlikely to happen, primarily due to the DLL issue but also because in Windows, the directory is the application bundle. Microsoft expects programs to use installers and doesn't really care how 'messy' your program's folder is. That said, the change in directory structure does not impose a requirement that installers are used or that it has to be on the system disk. The only change is that there will be more files in the folder with the executable. 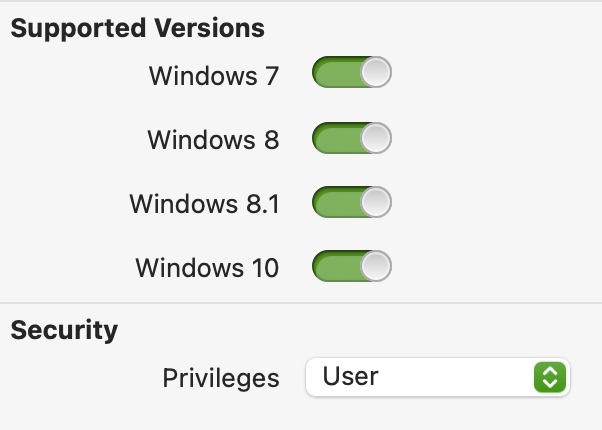 For Windows 64-bit apps a standard manifest is used. The manifest includes information from the Windows Build Settings, including version information, OS settings and RunAs settings.

Also note that since the Xojo IDE itself is 64-bit, any plugins you use must have a 64-bit plugin part in order for the IDE to recognize them. This is true even if you are building 32-bit apps.

To make it easier to build all the different versions of your app in one step, you can use the following IDE Script:

This script creates Windows, macOS and Linux builds for both 32-bit and 64-bit plus a Raspberry Pi build (ARM 32-bit) all in one step. You can comment out the parts you do not need to build.

If you are unable to build your project as 64-bit, please create an issue and attach the project, along with additional information such as the platform you are using and anything relevant from the system log.