A desktop app has a graphical user interface (GUI) and are run directly on the user’s computer.

When you create a desktop project, you get the following project items added automatically:

For a desktop project, the App object is a subclass of DesktopApplication. You use it to specify the default window that opens when your app starts, the default menu bar that is used by the app and the app icon (in various sizes).

The DefaultWindow property shows a list of all the Windows in the project. Select the one you want to automatically appear when the app starts. You can also set it to None so you can then show a specific window yourself from one of the App event handlers. 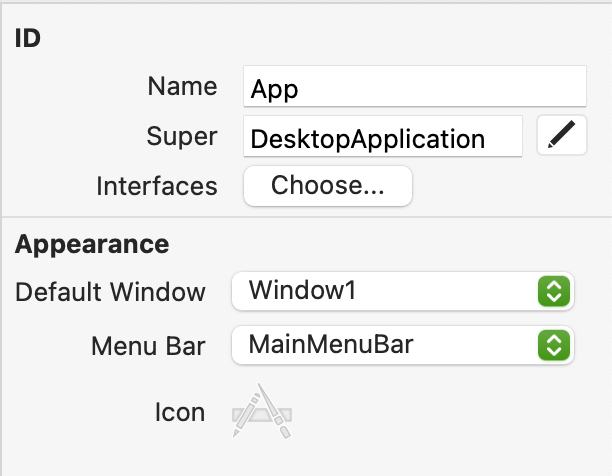 The Build Settings section of the Navigator contains the build-specific settings for your app in general and for specific OS targets. You can check the box next to each target in order to build an app for that target. Desktop targets are: Windows, macOS and Linux.

Note: Properties in this section that are accessible by the App function are in italics.

The Inspector for Shared settings contains these properties. 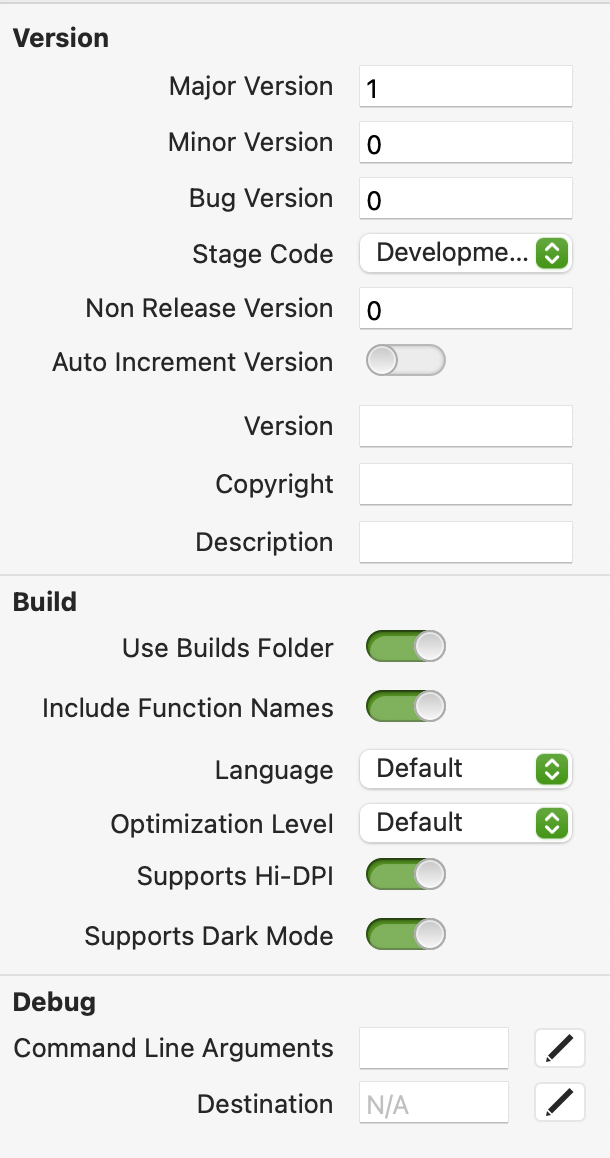 You can access some of these properties in your code by referencing the name in italics as a property of the App object. For example, this gets the Major Version:

You can also access/change some of these properties in an IDE Script. This IDE Script code changes the Optimization Level to Moderate: 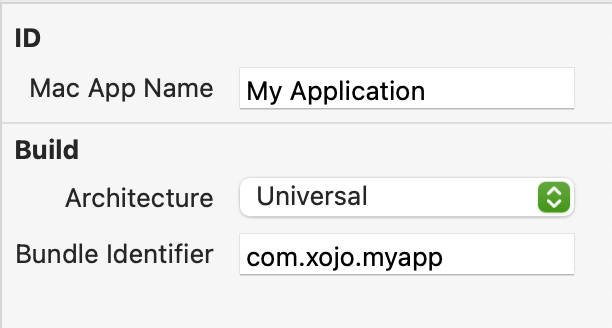 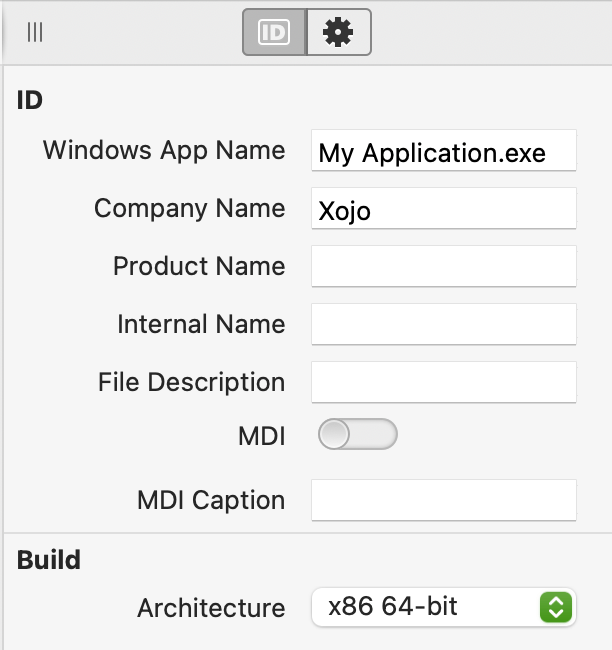 These settings are available on the “Advanced” (gear) tab of the Inspector: 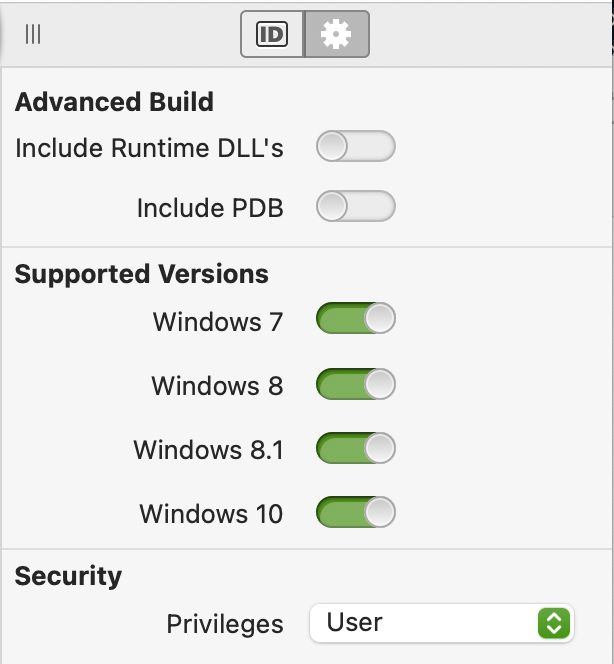 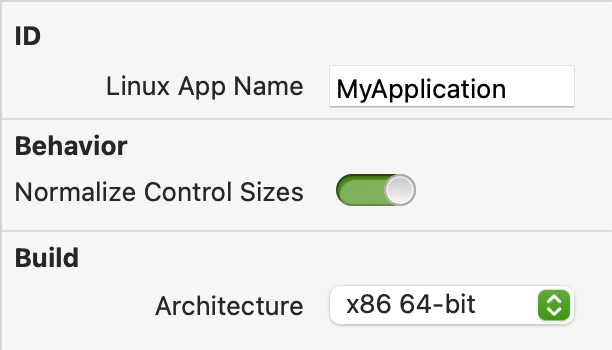 The This Computer section shows you the appropriate target settings (macOS, Windows or Linux) for the OS you are currently using. For example, if you are running Xojo on macOS, then This Computer shows the macOS Build Settings.

To create a stand-alone app for deployment, you create a build by clicking the Build button on the main toolbar or choosing Project > Build from the menu. This creates apps for each of the OS platforms you selected, with separate folders for each (when Use Build Folders is ON).

You can also use IDE Scripting to create builds.

Desktop apps are deployed by installing them on a computer and running them on the computer. Once you have created your builds, you’ll need to test them on the target OS and possibly package them into a format for distribution (such as an installer).

Always test your apps on the specific target platform!

Since an app is technically a folder, you have to include it in some sort of container in order to distribute it, such as a disk image (DMG), installer or even a simple Zip file.

Refer to Desktop Deployment for macOS for specifics on macOS app deployment.

Windows apps have a minimum of these parts: the main executable, its resources (contained in a Resources folder) and its libraries (contained in a corresponding Libs folder). All parts are required in order for the app to run.

Generally you should use an installer to deploy Windows apps. With an installer you can create shortcuts in the Start menu or Desktop and copy the files to the appropriate locations. There are many products available for creating installers for Windows apps. Two that work well with Xojo apps are Inno Setup and Advanced Installer.

For simple needs or for testing purposes, you can also just zip the Windows app and its related folders for distribution. You can create a Zip by right-clicking on the parent folder in Windows Explorer and selecting Send To > Compressed (zipped) Folder. Once unzipped, the app can be run from any location. Although this can be useful for testing purposes, it is not recommended for proper Windows app deployment.

When you compile a macOS app on Windows, the resulting app is created as a tar archive file. You can transfer this file to macOS and expand the archive in order to run it.

Refer to Desktop Deployment for Windows for specifics on Windows app deployment.

Linux apps also have these parts: the main executable and its libraries (contained in a corresponding Libs folder). Both parts are required in order for the application to run. It is also possible that there is a Resources folder that may contain localization files (or other files that you chose to copy there using Build Automation). Additionally, app icon PNG files are placed alongside the built app with these names: appicon_128 (128x128), appicon_48 (48x48) and appicon_32 (32x32).

How you deploy a Linux application varies depending on the Linux distributions you support. Different distributions have different formats for packaging. Common installer formats are deb (used by Debian and Ubuntu) and RPM (RedHat Package Maker) used by RedHat.

For simple needs, you can also just zip the Linux application and Lib folder for distribution.

When you compile a macOS app on Linux, the resulting app is created as a tar archive file. You can transfer this file to macOS and expand the archive in order to run it.

Refer to Desktop Deployment for Linux for specifics on Linux app deployment.