In its simplest form, a class is a container of code and data much like a module. But unlike a module, a class provides better code reuse. Classes are the fundamental building blocks of object-oriented programming.

Classes offer many benefits, including:

Before you can use a class in your project, it is important to understand the distinction between these three concepts: the class itself, the instance of the class and the reference to the class.

The Class: Think of the class as a template for a container of information (code and data), much like a module. And like a module, each class exists in your project only once. But unlike a module, a class can have multiple instances that each contain different data.

The Instance: Classes provide better code reuse because of a concept called instances. Unlike a Module, which exists only once in your running app, a class can have multiple instances. Each instance (also called an object) is a separate and independent copy of the class and all its methods and properties.

By themselves, control classes are not all that useful; they are just abstract templates. But each time you add a control class to a layout (a DesktopWindow, WebPage or MobileScreen) you get an instance of the class. Because each button is a separate instance, this is what allows you to have multiple buttons on a Window, with each button being completely independent of each other with its own settings and property values.

This is an example of a Vehicle class that will be used in later examples:

Note that this above code is for reference. You do not actually write code like this to create a class. To create a class in Xojo use the Insert menu or toolbar and choose Class.

These instances are what you interact with when writing code on the window and is what the user interacts with when they use your app.

When you add a control to a window (or web page), the Layout Editor creates the reference for you automatically (it is the name of the control). However, when writing code you create instances of classes using the New keyword. For example, this create a new instance of a Vehicle class that is in your project:

You interact with properties and methods of the class using dot notation like this:

Here the Brand and Model were defined as properties of the Vehicle class and they are given values for the specific instance. Having an instance is important! If you try to access a property or method of a class without first having an instance, you will get a NilObjectException likely causing your app to quit. This is is one of the most common programming errors that people make and is typically caused by forgetting the New keyword. For example, this code might look OK at first glance:

But the 2nd line will result in a NilObjectException when you run it because car is not actually an instance. It is just a variable that is declared to eventually contain a Vehicle instance. But since an instance was not created, it gets the default value of Nil, which means it is empty or undefined.

If you are not sure if a variable contains an instance, you can check it before you use it by using the Nil keyword like this:

This means the second variable refers to the same instance of the class as the first variable and is not a copy of it. So if you change a property of the class with either variable, then the property is changed for both. An example might help demonstrate this:

In this diagram you can see that the variables for both car and truck point to the same instance of Vehicle. So changing either one effectively changes both. 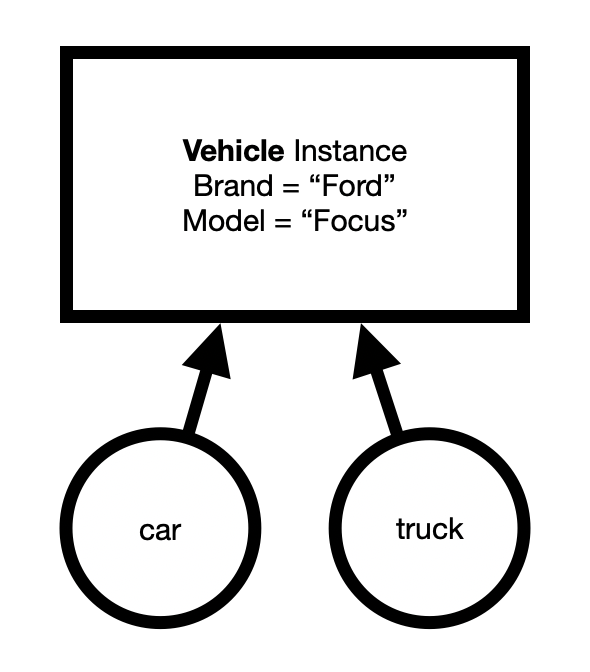 If you want to create a copy of a class, you need to instead create a new instance (using the New keyword) and then copy over its individual properties as shown below:

When you do it this way, you get two separate instances. Changes to one do not affect the other as you can see in these diagrams: 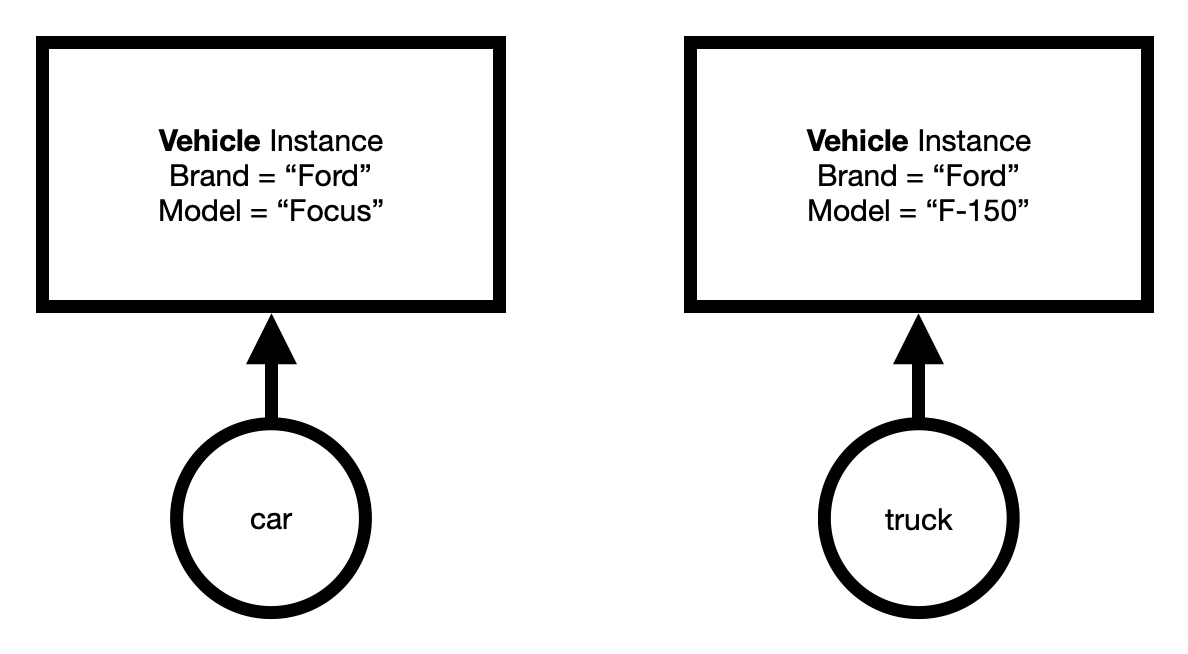 To add a class to your Xojo project, use the Insert menu or toolbar and choose Class. Your class will appear in the Navigator.

Note: You do not directly create classes in code. They are always added using Insert as described above.

Properties are variables that belong to an entire class instance rather than just a single method. To add a property to a class, use the Add button on the Code Editor toolbar, Insert > Property from the menu, the contextual menu or the keyboard shortcut (Option Command P on macOS or Ctrl Shift P on Windows and Linux). You can set the property name, type, default value and scope using the Inspector.

To quickly create a property, you can enter both its name and type on one line in the Name field like this: PropertyName As DataType. When you leave the field, the type will be set in the Type field.

Properties added in this manner are sometimes called Instance Properties because they can only be used with an instance of the class. You can also add properties that can be accessed through the class itself without using an instance. These are called Shared Properties.

A shared property (sometimes called a class property) is like a regular property, except it belongs to the class, not an instance of the class. A shared property is global and can be accessed from anywhere its scope allows. In many ways, it works like a module property.

Generally speaking, shared properties are an advanced feature that you only need in special cases. For example, if you are using an instance of a class to keep track of items (e.g., persons, merchandise, sales transactions, and so forth) you can use a shared property as a counter. Each time you create or destroy an instance of the class, you can increment the value of the shared property in its constructor and decrement it in its destructor. (For information about constructors and destructors, see the section Constructors and Destructors.) When you access it, it gives you the current number of instances of the class.

To add a method to a class, use the Add button on the Code Editor toolbar, Insert > Method from the menu, the contextual menu or the keyboard shortcut (Option Command M on macOS or :kbd:`Ctrl Shift M on Windows and Linux). You can set the method name, parameters, return type and scope using the Inspector.

When typing the method name, the field will autocomplete with the names of any methods on its super classes.

Methods added in this manner are called Instance Methods because they can only be used with an instance of the class.

You can also add methods that can be accessed through the class itself. These are called Shared Methods.

A shared method (sometimes called a class method) is like a normal method, except it belongs to the class, not an instance of the class. A shared method is global and can be called from anywhere its scope allows. In many ways, it works like a module method.

Shared Methods do not know about an instance so its code can only access other shared methods or shared properties of the class.

Generally speaking, shared methods are an advanced feature that you only need in special cases. A common usage of shared methods is to create an instance (rather than relying on a Constructor).