A class interface is a construct that you can use to tie together classes that do not share a super class but have something in common in your application. Class interfaces are used to specify what an object does without specifying how it does it.

In the object hierarchy, a subclass inherits both the interface and the implementation from its super class. That is, it gets both the method calls and the specific implementation of the method. Class interfaces enable you to separate the two constructs. If two or more classes need to do the same thing but do it in different ways, you use an interface instead of a super class.

Several class interfaces are built-in to the framework. You can implement any of these in your classes or add and implement your own. For example, the Iterator and Iterable interfaces specify methods that you can use to provide a way to iterate through the contents of a class by using the For Each...Next command.

Implementing the Interface methods in a class

When you click Choose, the Choose Interfaces dialog displays showing the names of all the class interfaces available to you. Some of the interfaces are ones that are built-in and others are ones you created yourself. Select one or more interfaces to assign to the class. 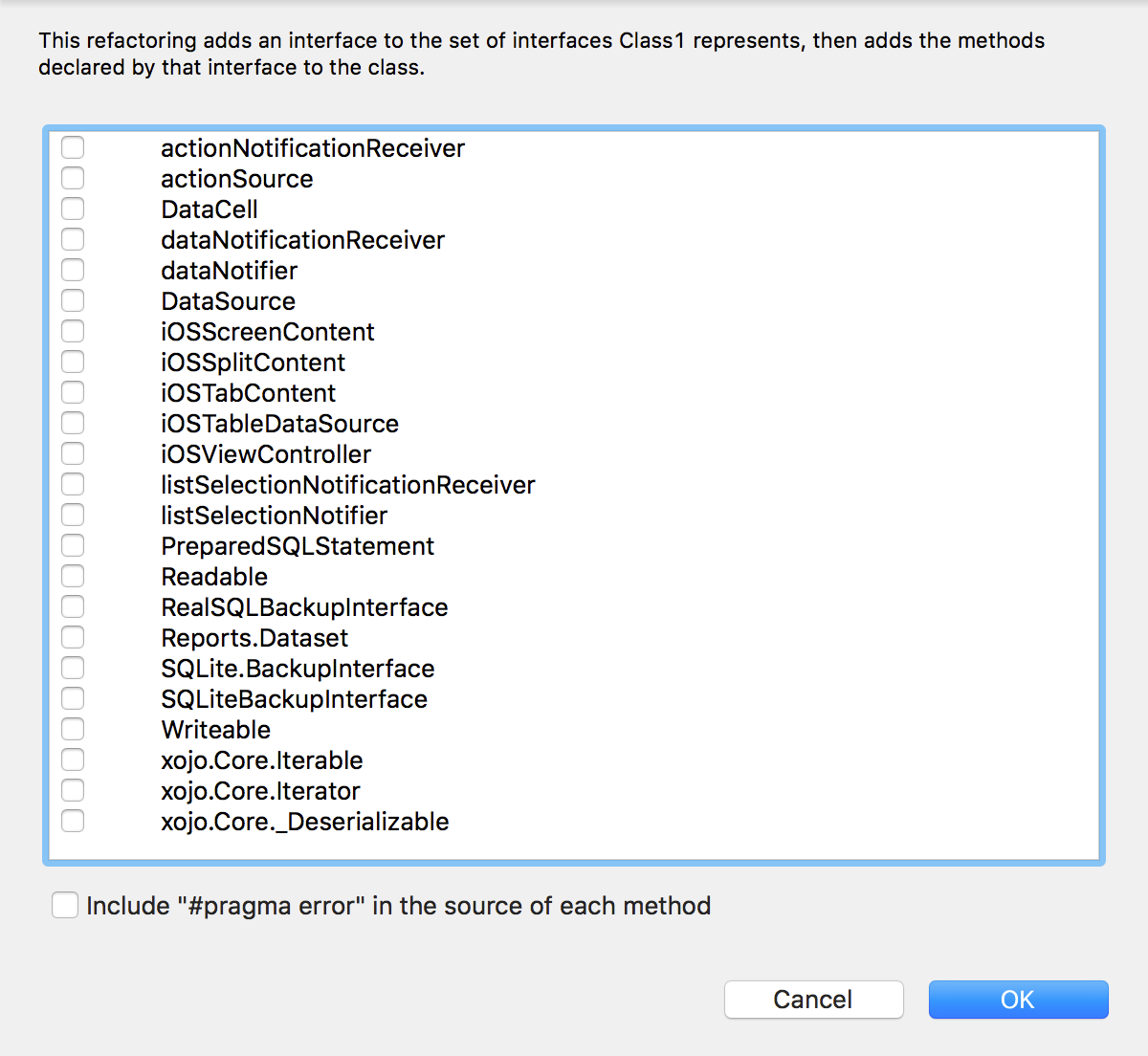 You can also select the “Include #pragma error” in the source of each method” to force a compiler error to be generated with the message “Don't forget to implement this method!". Remove the pragma after you have added code to implement the interface method.

If you modify or change the class interface after you have already applied it to a class, you will need to manually update the class.

If you attempt to compile a project that contains a class with an interface, but the class does not implement all the interface methods, you get a compile error: “This class is missing one or more methods of an interface it implements.”

Any method (public, protected or private) can be used to implement a method.

If you change your mind and want to delete or replace an interface, you do so the same way you added the interface. When the Interface dialog appears, uncheck the interfaces you no longer want.

Specifying the interface being implemented

In rare cases you may find you need a class to implements multiple interfaces each with methods with the same signature (same name and parameters or no parameters at all). This will cause a compiler error because the compiler doesn't know for which interface the method has been implemented. Fortunately, there is a solution using the optional Implements field in the method declaration pane of the Inspector, available using the Show Implements contextual menu of the method.

In this case, after selecting both interfaces, your class will have the duplicate method but with two signatures. First, rename one of the signatures so there is no longer duplication. Next, right-click (Control click on MacOS) on one of the signatures and choose Show Implements from the contextual menu. The Implements field will then appear in the Inspector. In this field, using the standard dot syntax, you can indicate the interface and method name that this signature is implementing.

For example, if you had two interfaces (Foo and Bar) that both include a Test method, in the Implements field, you would indicate Foo.Test for one method and Bar.Test for the other.

Creating a new class interface from an existing class

The new class interface is added to the project and the current class is made an implementor of the new interface. 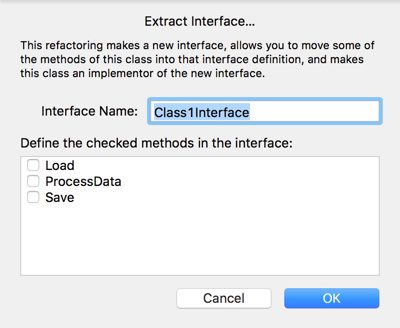 Polymorphism is the ability to have completely different data types (typically classes) behave in a uniform manner. This can be done using class interfaces.

Now create a new class (Cat) and select Animal as its interface. The Code Editor automatically adds the Speak method for you. Add this code to it:

Add another new class (Dog) and select Animal as its interface. The Code Editor adds the Speak method where you can put this code:

To test this, create a button on a window. In the Action event of the button add code to create an array of Animals:

Because Cat and Dog both implement Animal, they are allowed to be assigned to a variable (the animals array) with a type of Animal. And when you call the Speak method of Animal (in the loop), because of polymorphism, your code calls the Speak method of actual type (Dog or Cat) that was added to the array.

Interface aggregation is the ability to group several interfaces together into a “super interface.” This is an advanced feature that you may not need to use often. Consider these interfaces:

The Sweet interface is an aggregate of the Test and Awesome interfaces.

This allows you the ability to combine interfaces in creative ways. Although interfaces don 't necessarily relate to one another, there are times when you need something that satisfies the IsA command for multiple different interfaces. Or, when you want to merge functionality together for interfaces. For instance, say that you want to have an item which can be iterated over. A common interface might be:

This allows you to iterate over the object in a generic fashion. However, it could very well be that creating this iterator will cause circular references, or some sort of memory management issues. In that case, you might want to use a disposable interface, like this:

In the example, you could have the Iterator interface aggregate the Disposable interface. This would guarantee that anything which can be iterated over can also be disposed of afterwards.

You might be wondering “so why not just put the Dispose method right onto the Iterator interface?” That's a perfectly legitimate way to accomplish the same goal — however, Iterator and Disposable aren 't the same conceptually. So it doesn't make sense to force the two interfaces together in such a fashion. It doesn't hurt, but it just doesn't help either. Next is an example that would hurt.

Say you have a method that is going to generically take a parameter which represents something that can read and write to or from a source. In this case, you want something that's both Readable and Writeable. You could just declare the method like this:

This code will compile and will work, but it's also not safe. The user could pass in something which is Readable, but not Writeable and it will compile. Instead, the user could easily do this instead:

Now there will be a compile error if the item doesn't implement both interfaces. That's a much better solution to the problem.