The Layout Area displays as either a window, web page or view, depending on the type of project. Regardless, you add controls to the area by dragging them from the Library or the Navigator onto the Layout Area.

You can drag controls around the layout editor to position them.

Hold down Option before dragging a control creates a duplicate control at the new location (the original control is unchanged).

You can drag some controls onto other controls in order to make one control the parent of a another control (control parenting). For example you may add a Tab Panel control to a layout and then drag a button onto it. The Tab Panel control now becomes the button’s parent rather than the window itself. When you do this the parent control has a red outline around it, which you can control in the Layout Preferences. Other controls that make useful parents include the Group Box, Page Panel, Rectangle and the Canvas.

The Layout Editor has its own command bar (aka toolbar) with the following features, in order from left to right:

The Add button is used to add code-related items to the layout. This includes:

This button is grouped with View Code and is a toggle. When viewing a Layout, this button is selected. When not viewing a layout, you can click this button to quickly switch back to the Layout Editor to see the layout for the last item you were working on.

This button is grouped with View Layout and is a toggle. When viewing a Layout, this button can be used to switch back to see the Code Editor for the last item being edited.

The Set Default Value button allows you to set the default value for various controls. Refer to the Default Values topic below.

The Lock Position button is used to lock controls so that they cannot be moved by the mouse while editing the layout. You can still move the control using the arrow keys, change properties and delete it as necessary. 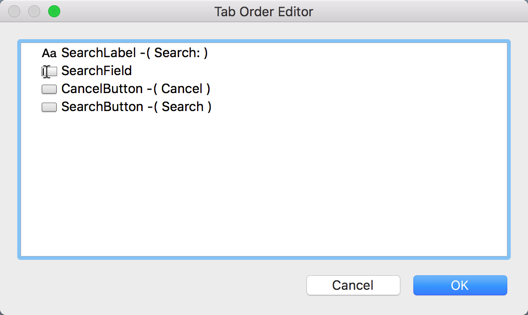 Available for Desktop and Web projects only. Show Tab Order displays each control in the Tab Order Editor. The controls on the layout appear in the editor list in tab order. You can drag controls around to change their tab order on the layout.

This item displays a dialog that will automatically adjust the tab order for the controls on the layout, which is faster than doing it manually. The choices are “Left to Right Top to Bottom” and “Top to Bottom Left to Right” with the flow indicated by the graphic in the dialog.

Select multiple controls to see various measurements, including distances between the controls.

The Ordering buttons (Order Forward, Order Front, Order Backward and Order Back) are used to change the ordering of the controls on the layout.

The Fill Width and Fill Height buttons expand the selected control to fill the remaining space in its container.

The Alignment buttons (Align Left, Align Right, Align Top and Align Bottom) are used to align controls on the layout with each other. Select all the controls you want to align and then choose one of the buttons to align them.

The Space Horizontally and Space Vertically buttons align the selected controls so that they are spaced equally apart.

On MacOS 10.14 and above, this button allows you to preview your window in light and dark modes. 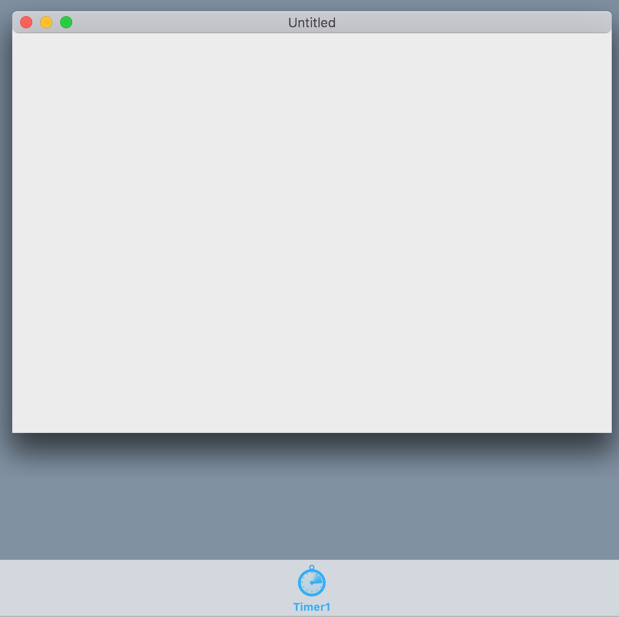 Some controls that are added to the layout are not actually a control on the layout, such as a Timer. When you add these types of controls to the layout, a Shelf is automatically displayed at the bottom of the Layout Editor and the control is added to it.

In web apps, Web Dialogs appear on the shelf.

In desktop apps, a toolbar added to a Window appears on the shelf.

This opens the Add Event Handler Dialog which displays the events that are available for the control (or the window, web pag` or view if that is what was selected). You can click on each event to view the description of the event. Select one or more events and click OK to create corresponding Event Handlers. You can also press ⌘ A (Ctrl A on Windows and Linux) to select all the Event Handlers to add at once.

You can add multiple events at once by selecting each of them and clicking OK.

Event Handlers appear in the Navigator underneath the selected control. You can click on an Event Handler to see its code in the Code Editor.

To disable the display of alignment guides, hold down Command while dragging (or Control on Windows and Linux).

Another option is to drag the subclass from the Navigator onto the Layout Area.

Working with controls on the layout

Working with controls in the Navigator

You can right-clicking (Control-Click on Mac) on any control in the Navigator provides the same set of options as described above. However, if you right-click on a deprecated event of a control, an additional item in the menu is available (“Replace Event With…”) which when selected will convert the event to its replacement.